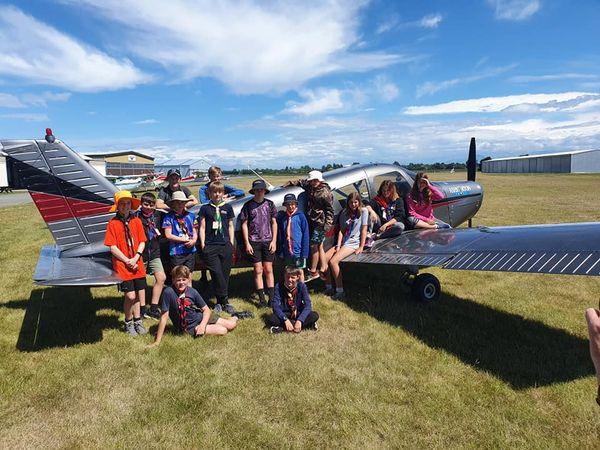 After much planning and worry over COVID and its effects, the 14th Tri-annual Staveley Adventure Camp opened on the 2nd January 2021 to the arrival of 329 Scouts, 54 Venturers and 109 leaders and staff who would camp together for the next seven days. Youth and leaders arrived from mainly the Canterbury area but also included one scout from the West Coast and a group of Scouts and Leaders from the Brooklyn Group in Wellington.

Staveley Adventure Camp is based in the little village of Staveley situated in the foothills 30 minutes west of Ashburton. The activities are many and varied with flying, welding, escape rooms, photography, sailing, and mountain biking, plus the usual scouting activities of camping, mini survival, tramping, cooking scout style, driving and mechanics. These are just some of the 39 activities available.

The thing that makes Staveley different to other major camps is the evening meal, where everyone comes together in uniform in a large marquee which seats 500 and are fed by the Staveley Adventure Camp cooks. The team of 5 produces a two course meal that any scout camp would be proud of with stews, roast meats and gravy and plenty of vegetables, and followed by a dessert. They didn’t forget those that have other preferences due to health or dietary requirements.

Staveley Camp would not be possible without the team behind the scenes, the group of 14 current scouters, ex-scouters, and associates – some who have attended every one of the 14 camps since 1982 – bring together their skills and the love of seeing youth enjoy the challenges and having fun while learning in a safe environment. The committee would like to thank the Youth for attending as without you there would not be a camp, and to the leaders and staff a huge thanks for being the ones who drive the vans, walk the hills, and challenge the youth and were there when we needed a hand. We all look forward to the next camp and to the new challenges that it will bring.