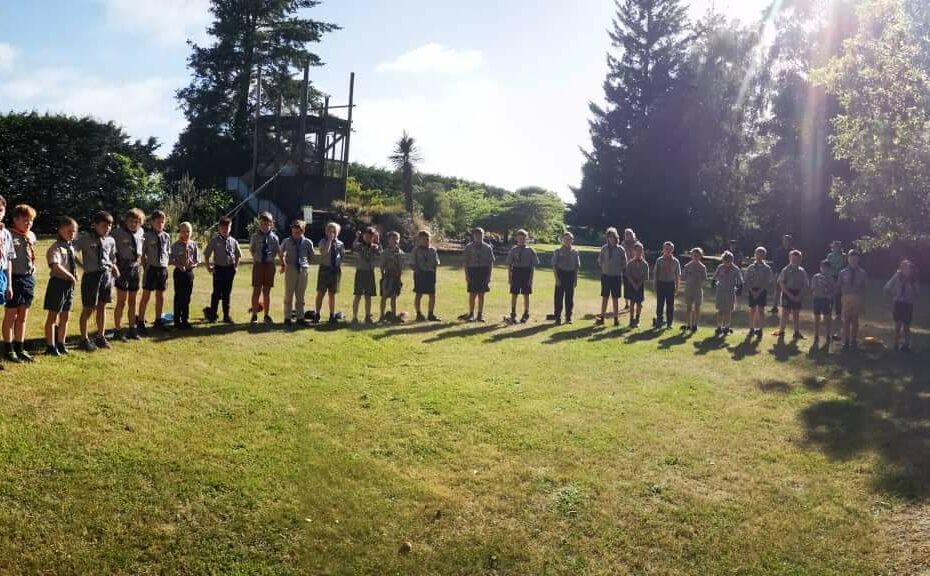 More than 40 Christchurch Cubs recently enjoyed a two night leadership camp at Omaka – the first zone-wide leadership camp in four years. The Cubs were split into small teams with youth they didn’t know which resulted in new friendships and connections being formed. Their first task was to come up with a team name and design a team scarf to be worn over the weekend. Some great names were thought of including the Pythons, The Kiwis, Team Trees, TacoCats, Aces, and Insert Name Here?.

On Saturday the Cubs were challenged with a range of activities that tested their leadership abilities and team building skills. They participated in a talk about leadership and what it means to be a leader, tackled the obstacle course as a team, filled in a RAMs form before archery, learnt how to lead a knot tying and trail signs activity for their own groups, built bivvys and played a giant game of The Floor is Lava. The Cubs also got to try their hand at cooking their own hamburgers over gas cookers.

Day two saw the Cubs implementing a plan, do, review of a game they had come up with and taught to another team. They soon learnt they needed to give clear instructions and explain each rule! A picnic lunch was enjoyed while watching Scouts compete in the Kon Tiki raft race and the Cubs then got to have a go at building a raft.

Feedback from the Cubs was overwhelmingly positive with comments such as “The obstacle course was good because it let me see the strengths and weaknesses of my team”, “The Floor is Lava was fun because we had to communicate and cooperate together, we had to work together”, and “I enjoyed cooking my own food because I’m not able to do that at home”. The main complaint about the weekend was that the wait for seconds at dinner was too long!